Behind The Scenes At Denver Union Station 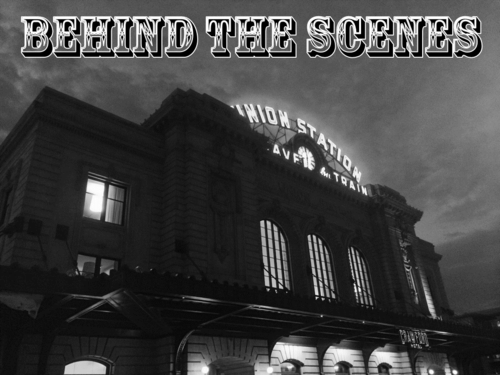 Working on Denver Union Station’s art program could be the biggest, flashiest, jazziest, historicalest project we’ve worked on yet (yet being the operative word.)  You may have seen and heard a lot about the project during the course of the renovation and since its grand re-opening, namely on CPR(!), but you’ve only just gotten a crumpet of the story, friends.  Part treasure hunt, archaeological dig and good old-fashioned art consulting, NINE dot ARTS curated one of the most eclectic corporate collections to ever straddle the 105th meridian west.

Not Just an Eponym

Not only does The Crawford feature the name of one of its key developers, the queen of historic preservation, Dana Crawford, but it also features artwork and frames from her personal collection as well as pieces donated from her friends and family.  The bar/club scene painting in the first floor north wing corridor, for example, came from Crawford’s friend Jill Crow.  The work was rescued from a bar in Pueblo, CO and refurbished for the Station.  Crow also donated Virginia Maitland’s Volcanic Pockets on the 3rd floor’s Crawford Suite.  Crawford’s son, who attended art school, has a photograph featured in the 4th floor corridor.  Nineteenth-century political cartoonist Thomas Nast, father of the modern version of Santa Claus and the elephant as symbol for the GOP, was Dana’s late husband’s relative.  A reproduction of his Peace in Union, which depicts the end of the U.S. Civil War with Lee’s surrender to Grant at Appomattox, hangs in the 3rd floor north wing guest corridor.

The series of fifty small portraits that steps up the first floor south wing stairwell came from a $3 poster bought at Philae and Peter Dominick’s estate sale.  The poster commemorated all fifty poets participating in the 1983 Cowboy Poetry Gathering, an annual event that celebrates cowboy heritage and entertainment which grew from the traditions of cattle drive workers.  Side note: the stairway’s walls are not traditional drywall but are instead concrete covered in plaster which made installation trickier. We had to use masonry bits and silicone to secure the pieces to the walls.

A smattering of silhouette portraits sits behind the hotel’s reception desk.  Prior to the advent of photography, silhouettes were the most cost effective method to capture a person’s likeness.  We, in our year-long treasure hunt for antique artwork and artifacts for the hotel, looked for smaller historic items because it is rare to find large-scale antique paintings.  We found a few silhouettes to start and kept adding to the collection.  But not all of the silhouettes are historic; thanks to the skills of our intern, Ada Rael, we added contemporary silhouettes of the hotel’s major players: Dana Crawford and Sage Hospitality’s Walter Isenberg front and center, our own Martha Weidmann and Molly Casey, and the teams from Tyrba Architects, JG Johnson and Milender White (complete with construction hats).

Union Station sits smack-dab in the middle of the 105th meridian west, the longitudinal line that extends from the North Pole through the Arctic Ocean, North America (bisecting Denver), the Pacific and Southern Oceans and Antarctica to the South Pole.  Isenberg challenged Nine dot Arts to find an artwork that relates to the meridian.  Our response: Kyle Goodrich’s commissioned, eighty-foot long painting 105th Meridian.  Goodrich’s piece charts the 105th’s elevation profile from the Antarctic’s two-mile thick ice sheets to the ocean floor.  To create the piece, Goodrich rented a series of party tents he erected in his yard so that he could work on the piece in its entirety to ensure that each panel’s lines would match up perfectly.  Working at all hours for two weeks to create the piece, he ran into trouble with evening gnats that got stuck to the wet paint.

Our original plan for the fourth floor’s loft rooms included custom, street-inspired murals by local artist, Nick Toll.  To comply with construction safety codes, he turned his shorts into pants using saran wrap and blue painter’s tape.  During three overnight shifts, Toll created a trippy, edgy mural to go with the planned design’s urban feel.  But alas, the mural, despite its awesomeness, did not fit with the final design that ended up being more refined and sophisticated; the Toll mural was painted over, never to be seen again.  Instead, we opted for nine now infamous dapperly bow-tied jackalopes.  Truly the rarest animal in North America, these jackalopes could only be found in one place: South Dakota’s Wall Drug.

Again, these tales are just a sliver-sized peek into the full collection.  As you call tell, the individual pieces themselves, not to mention the collection as a whole, are, to take the words of Isenberg, “as storied, as unique, as exciting as the building itself.”