Gender in The Art World, A Look At The Numbers

As a women-owned business, we often hear ourselves described as art ladies, gals or even girls (despite the fact that we’re all adults and some of us have children of our own). While it’s true we’re two-thirds women, we’re also one-third men. This got us thinking about art world ratios. Are there really more arts women than men? After a few minutes of research, however, it became clear that the overwhelming answer was no. The National Endowment for the Arts’ latestArtists and Arts Workers in the U.S. study shows that the number of arts workers are split nearly 50/50 by gender. But the more we dug into the statistics, the more disparity we found between men and women in the arts.

When you look at art history and even the present day art world, it’s no surprise that women artists get the short end of the paintbrush—if they get one at all. When asked by artnet News whether the art world was biased against women, artist Marilyn Minter replied, “Hahaha…Is the Pope Catholic?”  Let’s take a look at the numbers:

51% of visual artists are women

50% of MFAs in the US are earned by women

46% of all artists and arts workers in the U.S. are women

30% of gallery-represented artists are female

19%: the wage gap between male and female artists/arts workers

$51.3 million: the gap between the highest auction record for a living male artist to that of a living female artist

1:  the number of women included in the top 10 living artists based on total value of secondary market sales (2011-2016)

1: the number of Tier I female executive directors (out of 5) in the Scientific & Cultural Facilities District in the Denver metro area

0: the number of women on the highest-selling individual lots for living artists (2011-2016) 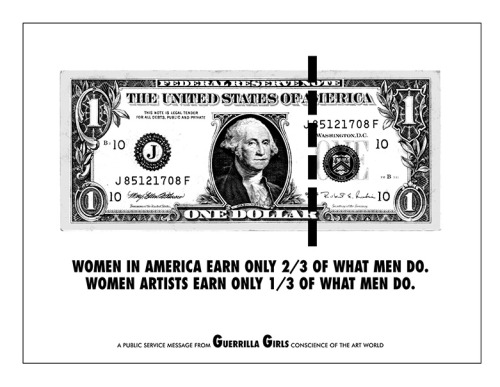 As the anonymous, gorilla-masked feminist activist artist collective, The Guerilla Girls, has shown since 1985, bias against women continues in the arts at an alarming rate even if things have gotten (slightly) better. Art critic Ben Daviscites forces outside the art world such as socialization and systemic economic disparity as key factors in the discrimination of female artists. But he says, “exposing the fact that conditions within art depend crucially on factors that go beyond it shouldn’t let the art world off the hook.” Connie Butler, chief curator at the Hammer Museum in Los Angeles, spoke to Hannah Ghorashi at ArtNews and, like Davis, compares the art world to the rest of the world: “Look at the percentage of women senators, or look at how long it’s taken us to elect a woman president. These things are all connected. A cultural shift has to take place.”

Historically, women have played a huge role in building arts institutions and collections. Gertrude Vanderbilt Whitneyfounded the Whitney Museum of American Art. Three women, Lillie P. Bliss, Mary Quinn Sullivan and Abby Aldrich Rockefeller, founded the Museum of Modern Art (MoMA). Dorothy Canning Miller was the first professionally trained curator at MoMA and the first art consultant, a profession that continues to be female-run. Peggy Guggenheimamassed one of the most important collections of modern and contemporary art in the world. Guggenheim also exhibited the first all-woman modern artist show in 1943. Dorothy Vogel, along with her husband Herbert, created one of the most important collections of post-1960s minimalist and conceptual art in the world. Here in Denver, MCA Denver was founded by philanthropist Sue Cannon in 1996. Yet despite their female roots, many organizations have turned a blind eye towards women artists. MoMA’s collection, for example, remains male dominated. Even the historical section of their website identifies two of its founders in terms of their husbands: Mrs. Cornelius J. Sullivan and Mrs. John D. Rockefeller, Jr. The Whitney, excluding the memorial exhibit to its founder, didn’t have a solo exhibition by a woman until Louise Nevelson’s 1967 show.

People point to the market and others to the buyers as the driving force behind the gender disparity: museums and galleries aren’t giving female artists the shows, so the collectors don’t see the value; men still control most of the wealth and they want their collections to reflect themselves (i.e. male artists.) Susanne Vielmetter spoke to ArtNews’ Catherine G. Wagley: “The discussion always stops at the market, because no one wants to dictate [to] the collector… If you are a collector, of course, you can do this as a very personal endeavor. But you could also think about how you’re influencing the culture of our time.”

Some collectors and organizations are doing just that. In 2015, the Rubell Family Collection exhibited No Man’s Land at 2015’s Art Basel Miami Beach, a show New York magazine says “provides a survey of what recent art history might look like if you filter out the men.” This summer the Denver Art Museum will present a groundbreaking exhibition thatClyfford Still Museum Director, Dean Sobel, says is “70 years overdue.” The exhibit, Women of Abstract Expressionism, brings together over 50 major paintings by female artists together for the first time. Featured artists include Helen Frankenthaler, Elaine de Kooning, Lee Krasner and Joan Mitchell among others, women who have often been overlooked. The AbEx movement has long been associated with male action painters like Pollock, Rothko, Still and Motherwell but this exhibit could prove it wasn’t such a boys’ club in actuality. Hauser & Wirth made its Los Angeles debut earlier this year with Revolution in the Making: Abstract Sculpture by Women, 1947-2016. The show includes 100 works by 34 artists, 60 pieces of which are on loan from nearly 60 major American museums, artists’ estates and private collections. Robischon Gallery’s “Declaration” features three female artists (Judy Pfaff, Jae Ko and Linda Fleming) from its stable alongside critically-acclaimed, internationally-recognized artists from the Ginny Williams Collection. Boston collector Barbara Lee started the Barbara Lee Family Foundation, which supports programs that advance women’s equality and representation in politics and the arts. Lee has also made monumental gifts to the ICA Boston, first with a donation of 43 works by female artists in 2014, and then with another 20 works by 12 female artists in 2015 valued at $42 million. 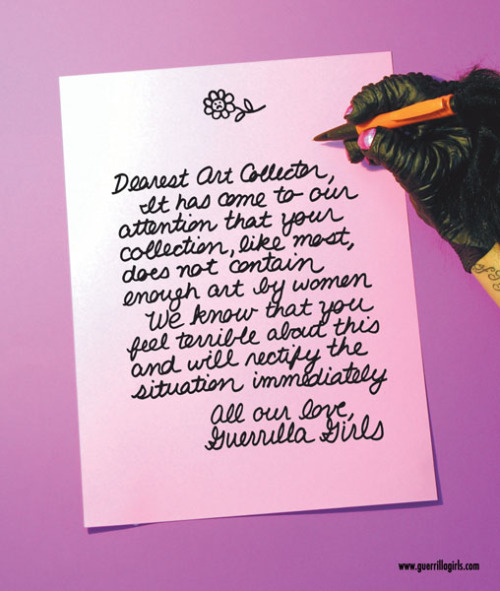 From an investment stand point, women artists, as dealer Iwan Wirth says, “are the bargains of our time.” Amy Cappellazzo, an art advisor and former head of post-war and contemporary art at Christie’s, told ArtNews the market is “steadily improving for women at a faster clip in the last five years than in the previous 50 years.” As the market value of female artists continues to climb, we can only hope that someday the playing field will level off for women artists and arts workers. Until then, however, it’s up to all of us to be more cognizant and act as the change we want to see not only in the arts world but in the world at large.