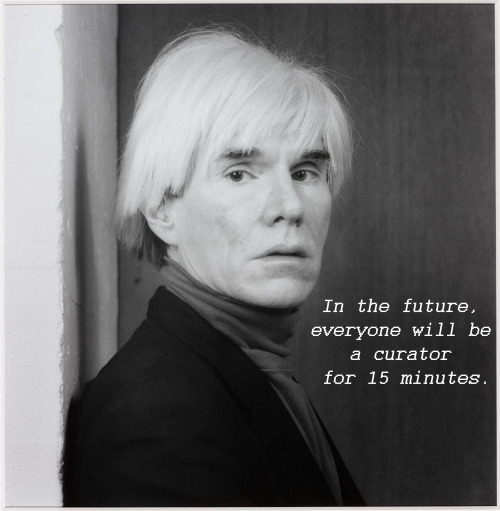 Curated has become a bit of a buzz word these days. The term has migrated outside the museum to infiltrate nearly every aspect of our lives from retail sites like Canopy, coined as “Amazon, curated” to “curated computing” on your iPad. Curate actually stems from the Medieval Latin curatus: “one responsible for the care (of souls)”. It began as a noun for a spiritual leader.  This definition and usage still applies but, for most of us, our understanding of the word has morphed to include the selection, interpretation and care for tangible objects in a cultural, scientific or historic institution, most notably art museums. Since the millennium, however, the internet has democratized the term to include the selection of any type of content, presented in any format, by any self-defined curator (Kanye West included) hence the myriad shopping sites, monthly subscriptions, blogs, tweets, links and Pinterest boards all bearing the curated tag. Much has been made of this definition expansion from The Chicago Tribune to The New York Times. Even officially-dubbed museum curators feel ambivalent towards the title as it now stands – at times rejoiceful, flattered, fearful, dismissive, offended, flabbergasted. Like much of life as we know it in 2015, our understanding of and grasp on the term is in constant flux, resulting in nebulous, hazy ideas that we’ve cobbled together from multiple, disparate, even contradictory sources.

All of this begs the question: what does NINE dot ARTS mean when we say curate or curated? First, let’s talk about our curatorial philosophy and process. Perhaps, if you’re a regular reader of our blog, you know that we put art on the spiritual level and as such treat it with the utmost care and respect.  Harkening back to the original definition of curate, we see ourselves as both guides and caretakers on a mission to use the power of art for good. And we also see ourselves positioned in that newer role as selectors and interpreters. Museum curators study their chosen field for years, often earning several degrees including PhDs. Their role as selector and interpreter is steeped in research culled from countless hours of analysis and thought to provide context and meaning for individual works, exhibitions and entire collections. To curate is to develop an argument or thesis that is visually manifested by the selected artwork. Like museum curators, we study, we research, we analyze and we present a clear argument for each collection. Whereas a curator develops meaning in the context of art history, we find meaning as it relates to each client’s story.

Now, let’s delve into what we mean when we say curated collection. As anyone who’s ever been to art school knows,juxtaposition is another one of those art buzz words that has maybe-kinda-sorta-for-real gotten out of control. Nevertheless, juxtaposition, whether through similarity or disparity, remains a powerful tool not only in visual art but also in literature, film, music, theatre, dance and even comedy.  Artworks, of course, have meaning as an individual piece, but when they are displayed together in the same space, whether it’s a museum, gallery, law firm, boutique hotel or hospital, they become part of a multifaceted conversation with each other and the viewer. This may all seem obvious (a collection is the sum of its parts, duh!), but what differentiates our use of curated collection stems from a distinct perspective, point of view, vision, voice (or whatever you want to call it) in the juxtaposition of those individual works.

We’re not interested in creating so-called thematic collections that repeat the same idea, presented in like fashion on each wall. Let’s be clear: a theme (or variation on a theme) does not a curated collection make. Rather we aim to create collections brimming with complexity and nuance so that every art piece engages the viewer, enlivens the space and tells that client’s singular story in a new and unique way.  Even within extremely specific selection criteria whether it be geographic or stylistic or driven by content, medium, price or size, a collection can be both thoughtful yet creative, refined yet expansive, diverse yet unified. A curator constantly moves the lens through which the audience views. Each new work examines the thesis from a different angle. With an art collection, the number of shifts will be determined by the scope and scale of the collection.  We develop collections the same way: every piece recontextualizes the selection criteria as well as the work seen before and after it.  As a result, the viewer has a constant shift in understanding (from subtle to drastic) of the entire collection and by proxy the collector.

We believe that a truly great collection holds up to the Rule of Thirds: viewers should love a third of the works, feel neutral about a third and hate a third.  Why, you may ask, would we want anyone to hate any art we place? To start, because art remains highly subjective.  Second, when you aim to please everyone, you start to boil things down to the lowest common denominator which generally equates to a ho-hum, generic and even boring collection that merely hangs on a wall, doing nothing for your employees, clients or brand. Third, occasionally a work you start out hating becomes the one you love most because it challenges you.