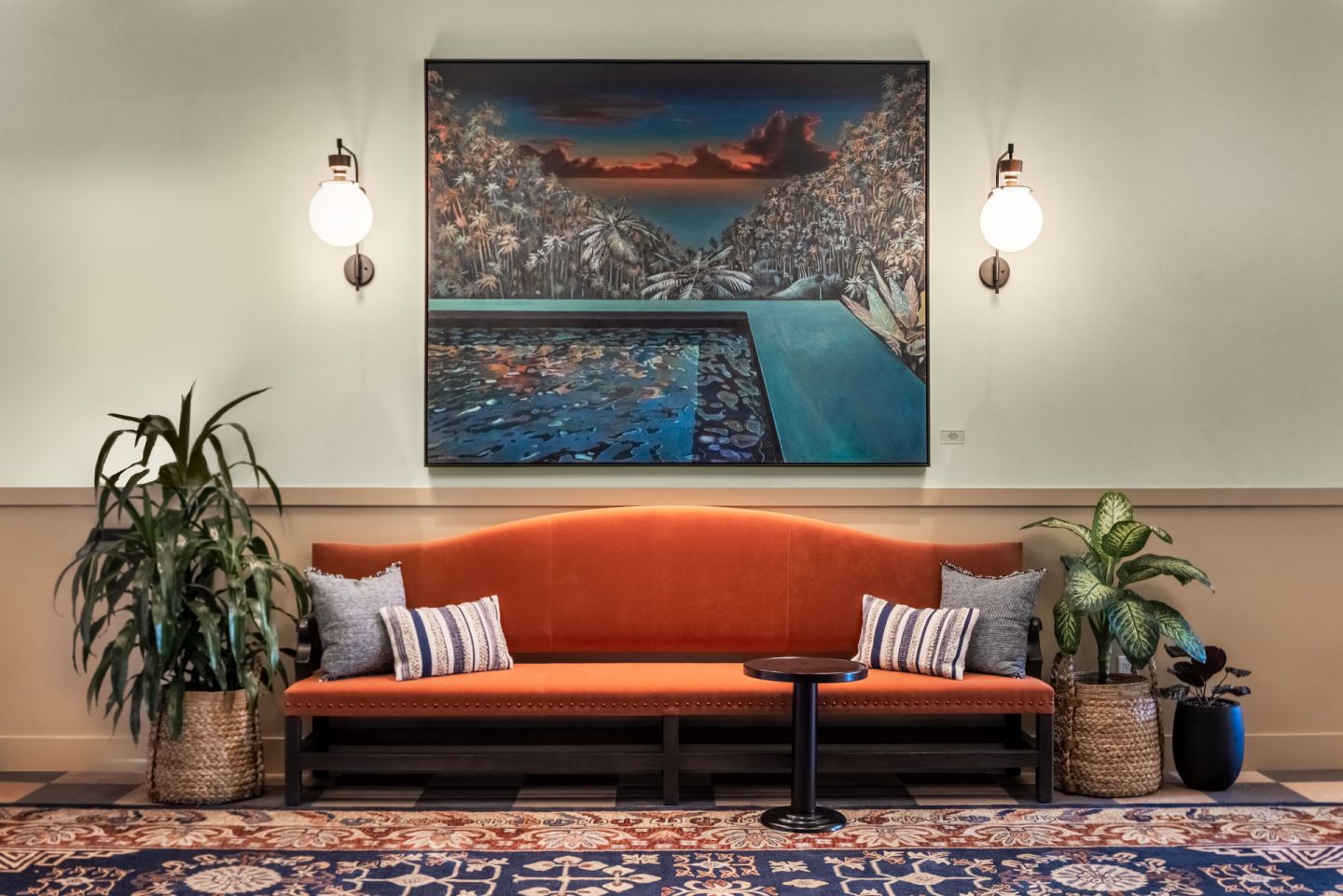 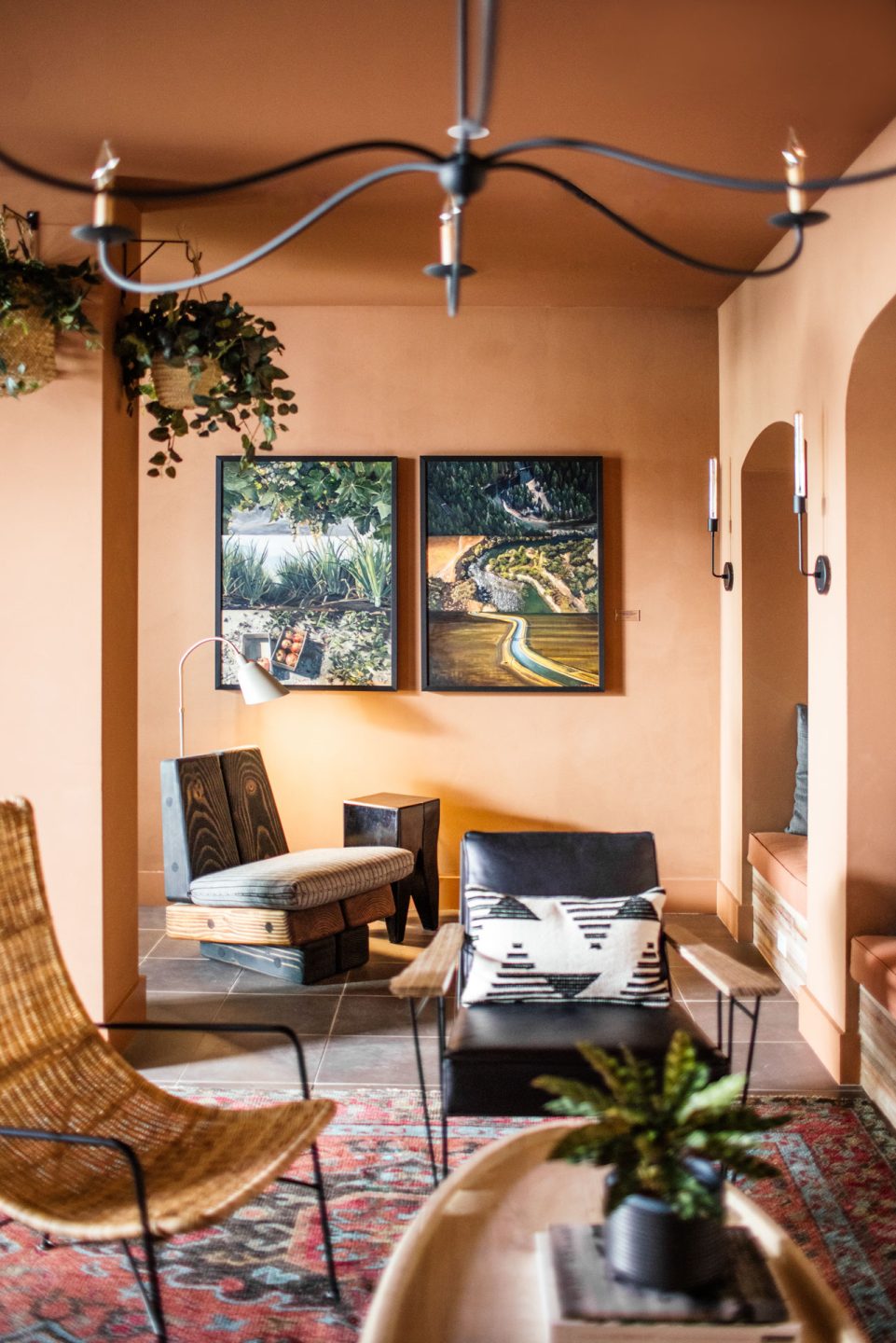 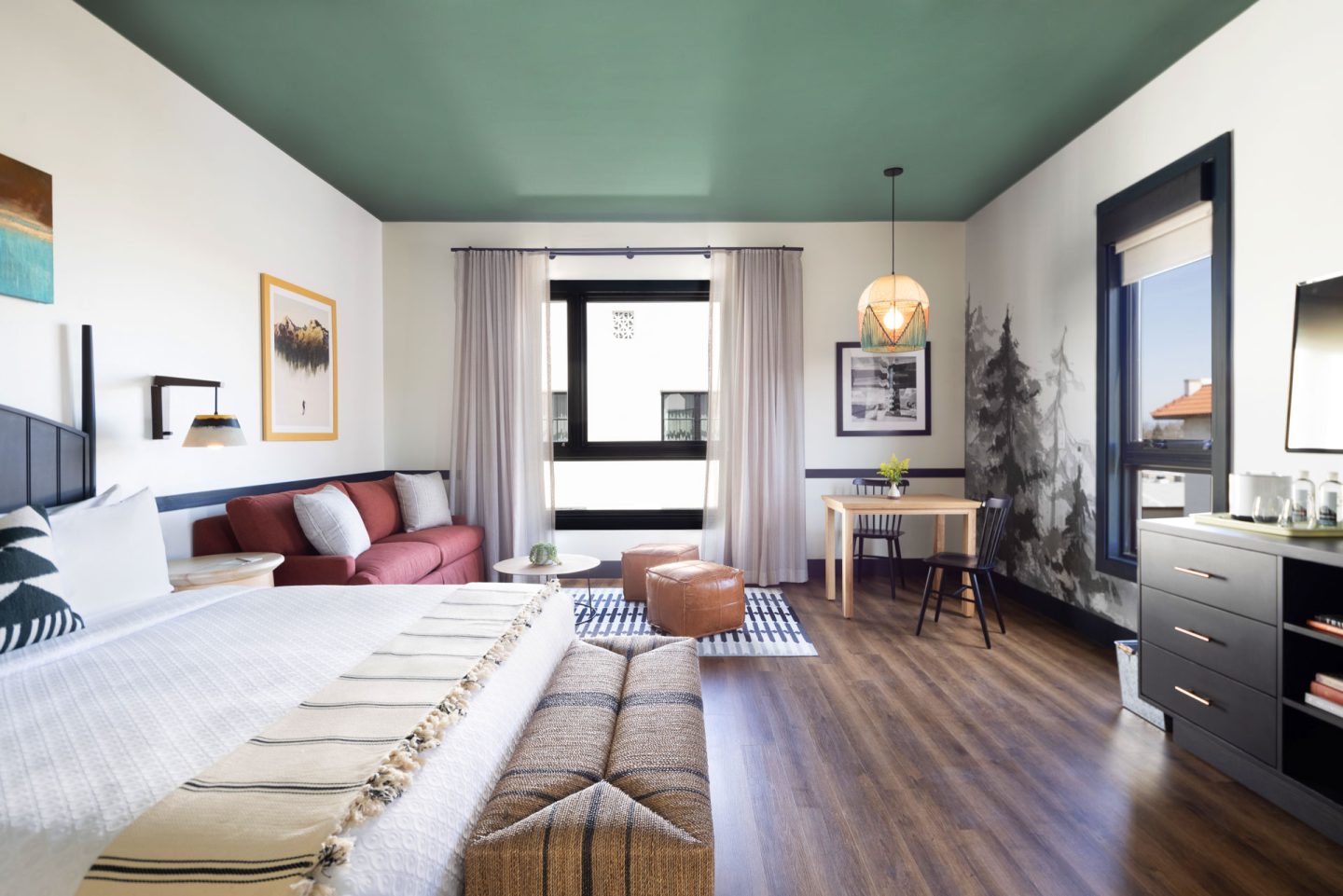 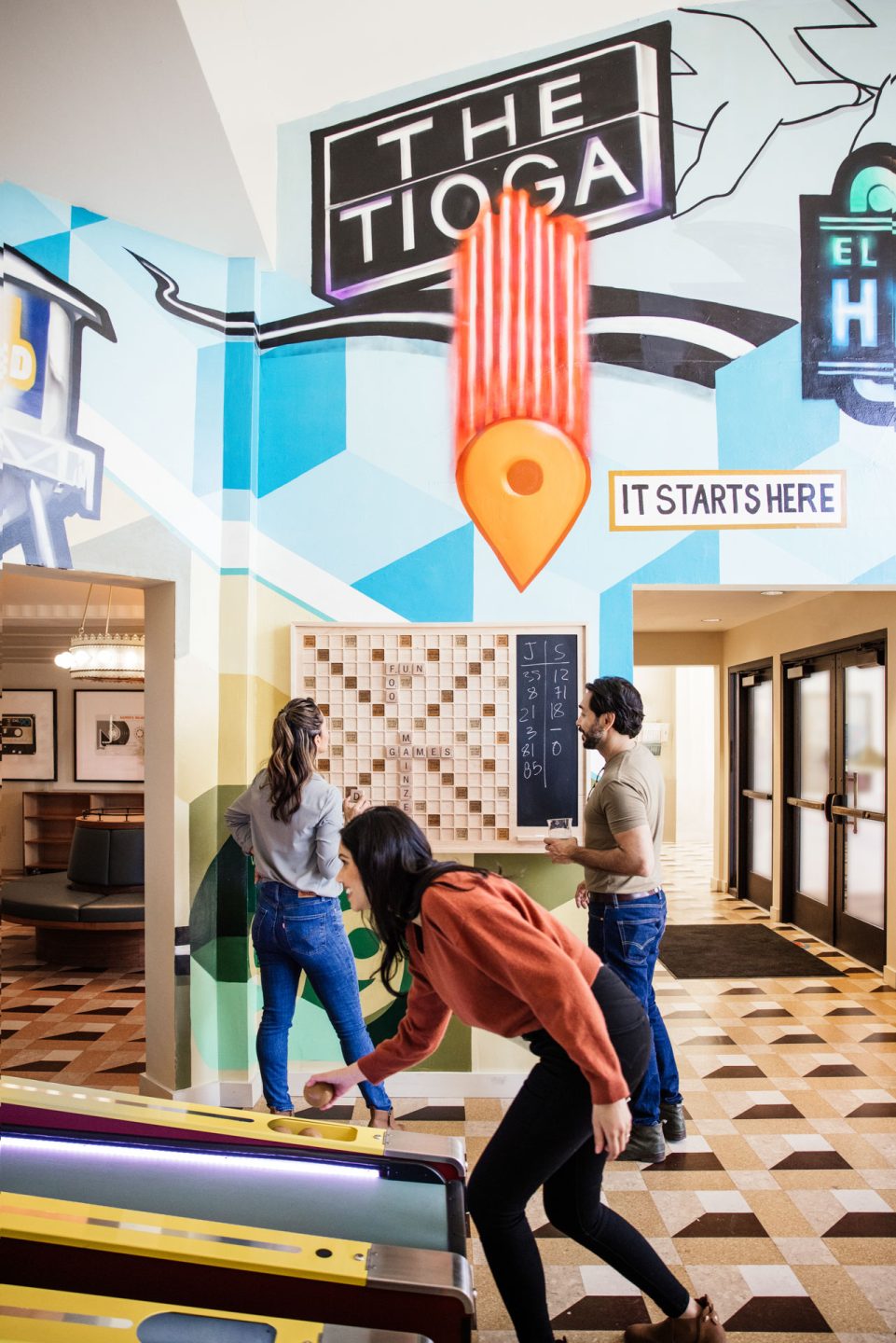 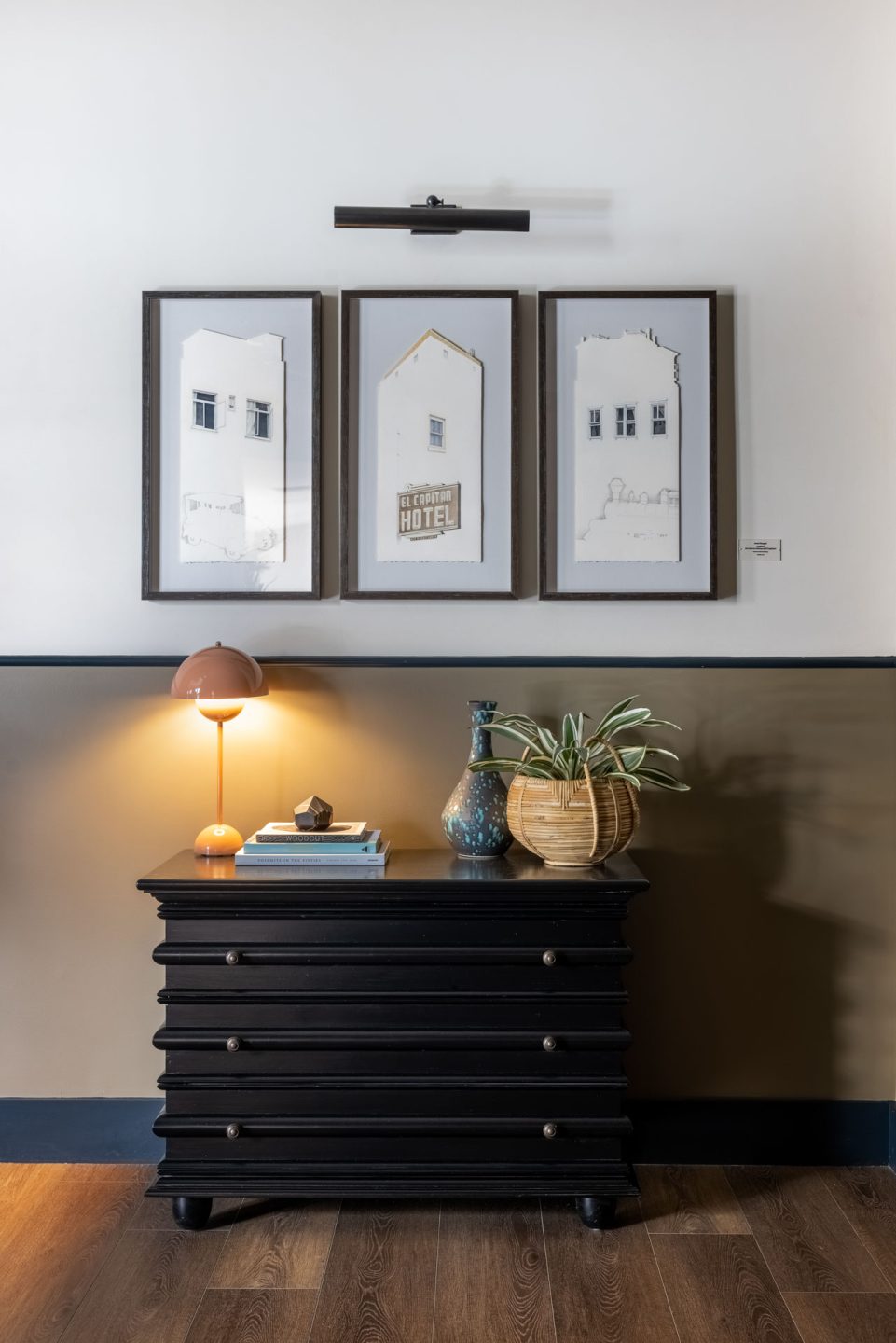 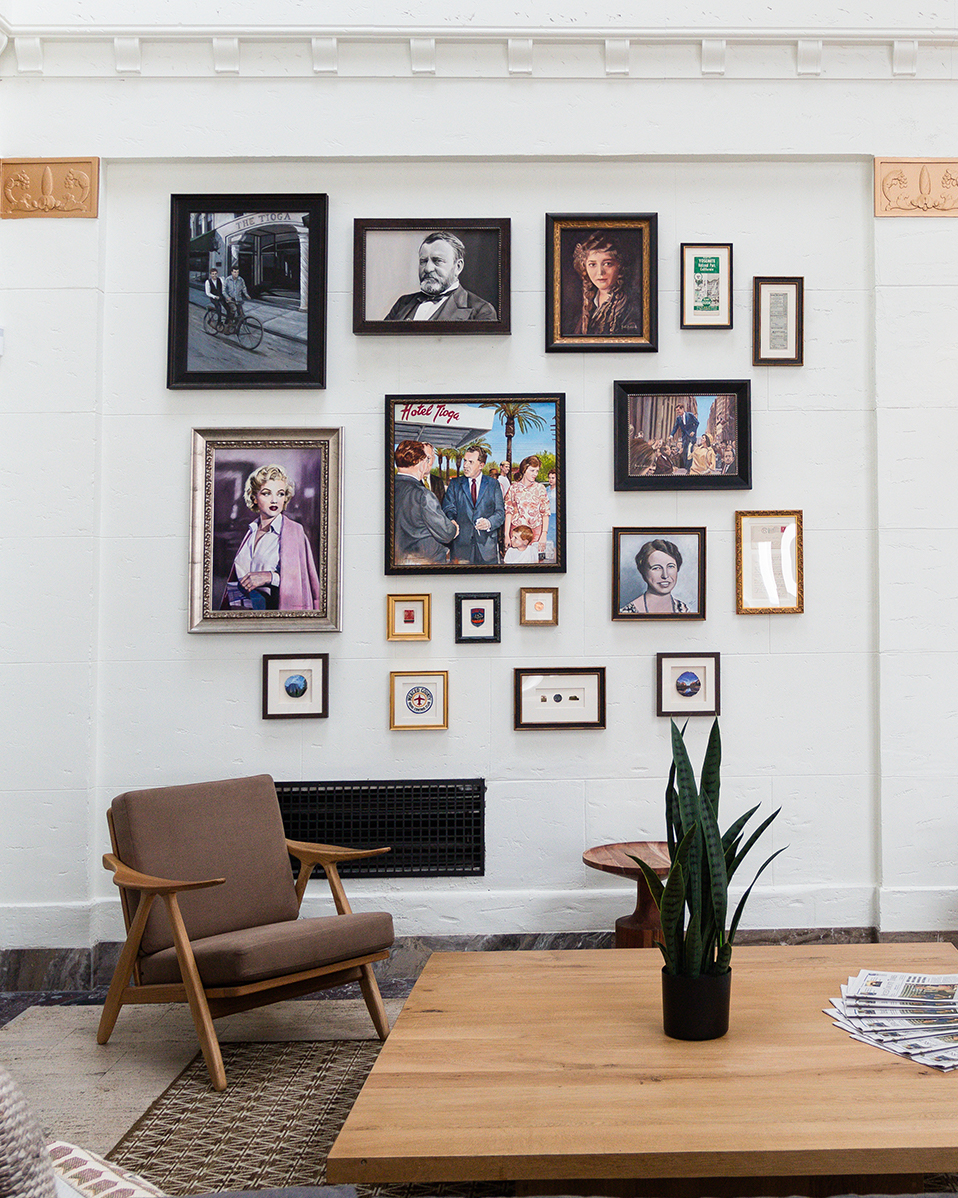 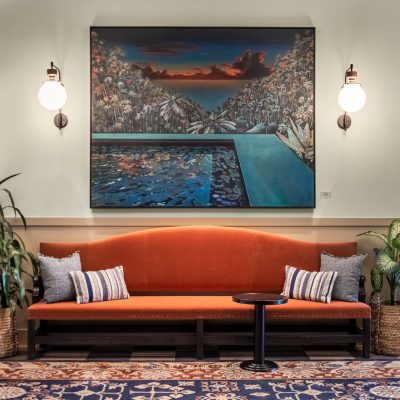 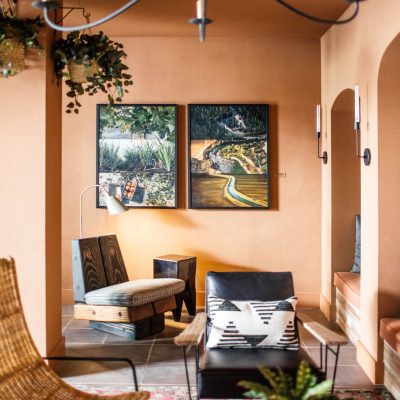 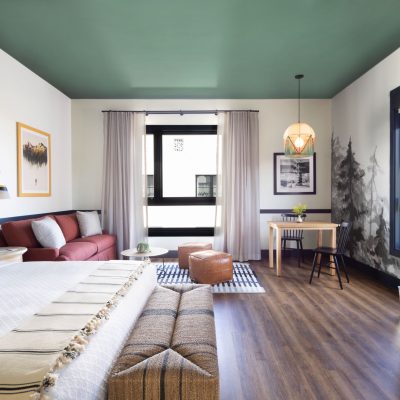 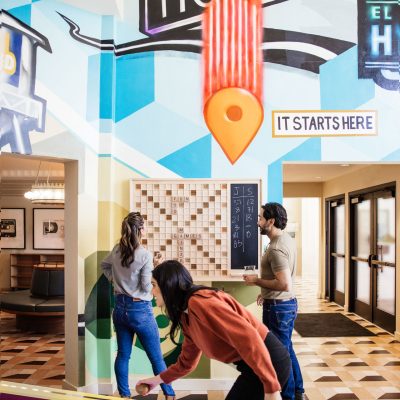 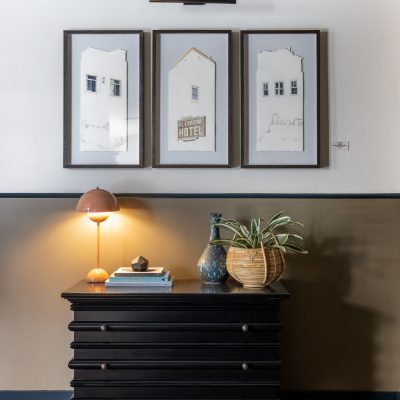 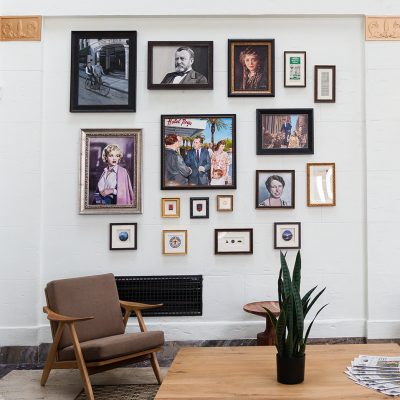 Once known as the “Gateway to Yosemite,” the town of Merced, California was a vibrant cityscape graced by cultural icons such as Marilyn Monroe, Richard Nixon and John F. Kennedy. A trio of hotel, event and multifamily spaces in the historic El Capitan Hotel, the Mainzer Theater and the Tioga Apartments offer hospitality and culture to visitors passing through and locals here to stay. Captured by the town’s rich history and paired modern themes, NINE dot ARTS intentionally crafted three diverse art collections. Intended to serve as a tour guide, the unique artworks ranging from murals to sculptures to vintage photographs walk guests through the stories of the once not-so-sleepy town, showcasing people on their voyage into world-renowned Yosemite National Park and beyond.

El Capitan Hotel showcases a multitude of artworks from California’s Central Valley artistic talent, with the majority of selected artists being locals of the Central Valley area. The intriguing collection of 40 artworks shines a light on the rich history of Merced from the lobby to guest rooms, and also incorporates creations from art professors and students from surrounding universities such as Merced College and College of Sequoia. The artwork expands beyond expected artistic approaches, featuring mixed-media installations; time-traveling photography; oil and digital paintings; wood, ceramic and bronze sculptures; printmaking; and textiles. Multidimensional installations like Margaret Haden’s ceramic wall display, Ontogenesis, capturing the aerial view of Merced’s natural wonder and tourist-attracting almond orchards, illustrate the majestic beauty of the surrounding environment.

The approachable and playful art housed in the Mainzer commemorates the space’s history as a theatre and celebrates its new purpose as a movie cinema, restaurant and event venue with an anthology of posters from some of the 20th and 21st centuries’ cult classics. Tying in the timeless history of downtown Merced, NINE dot ARTS drew inspiration from the local culture and social gathering aspect of the Mainzer and partnered with the Merced Multicultural Arts Center to launch the multi-functional space’s authentic and engaging art program. With several artworks created from nostalgic materials such as old vinyl records, the most notable contemporary, yet historical display in the collection is the immersive mural painted by local artists Patricia Pratt along with the help of Eddie O. Rodriguez and Erik Gonzalez. From the floor to the ceiling of the Mainzer’s game room, the animated design brings in elements of Merced landmarks, nodding to the town’s most recognizable sights, while housing whimsical entertainment such as a jumbo tic-tac-toe and Connect 4. Guests encounter several multimedia works, including collage paintings, pop culture collectibles such as mixtape photographs and old Hollywood wooden matchboxes, and varying-sized shadow boxes displaying cut paper portraits of movie characters and scenes.

The art collection throughout the El Capitan Hotel, Mainzer Theatre and Tioga Apartments was curated by the NINE dot ARTS team to be the culturally vibrant, eye-catching, and electric tribute that was needed to reinvigorate the town’s downtown area.

Originally opened in 1923, The Armstrong is Old Town Fort Collins’ only independent hotel, standing as a beacon for the town’s legacy and history. We were brought in to curate a new art collection for The Armstrong during the early stages of their recent remode...

The Crawford Hotel at Union Station

Located inside Denver’s historic Union Station, The Crawford celebrates not only the history of Denver but also the rebirth of this iconic transit-oriented hub into a mixed-use destination for dining, social gathering, and busy travel activity. Our NINE dot ARTS curating team enthusiastically...

A unique micro-district in the heart of Denver’s historic Lower Downtown or LoDo district, Dairy Block continues the tradition of industry and craftsmanship of its historic past, while presenting its visitors with contemporary, immersive experiences. Once home to Windsor Dairy, which was brough...