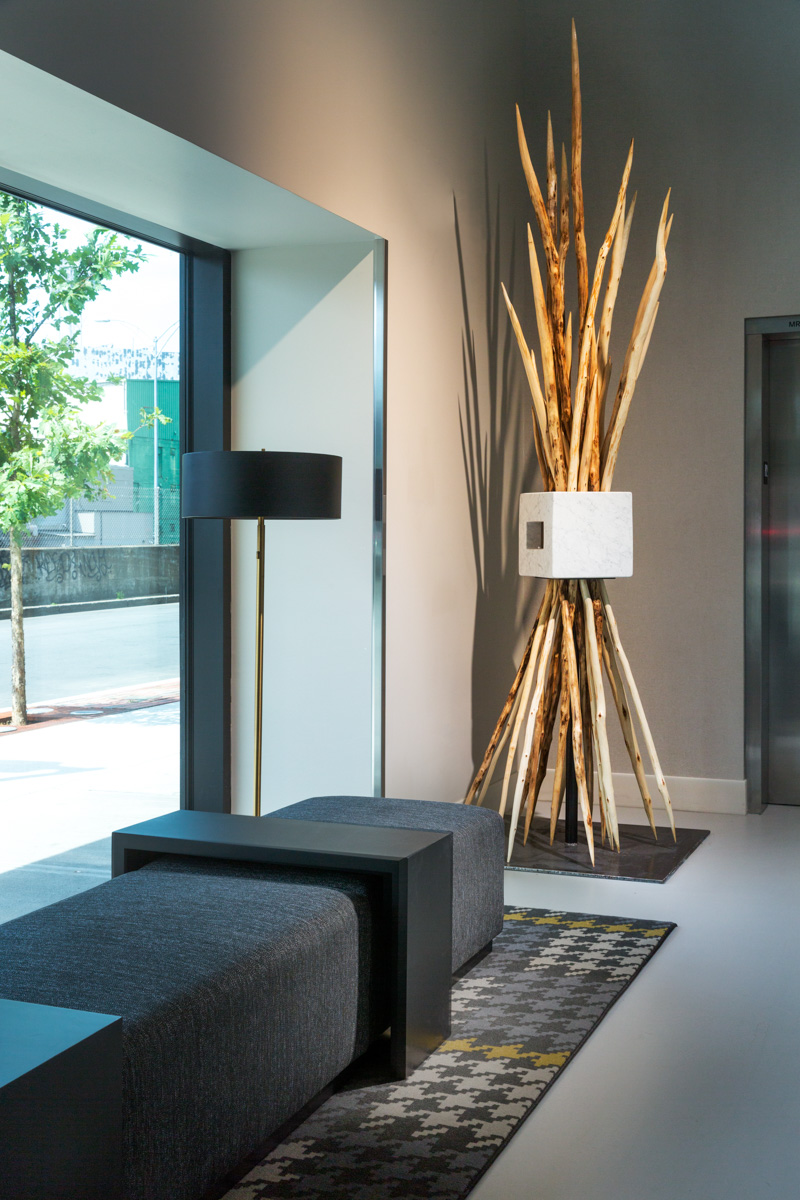 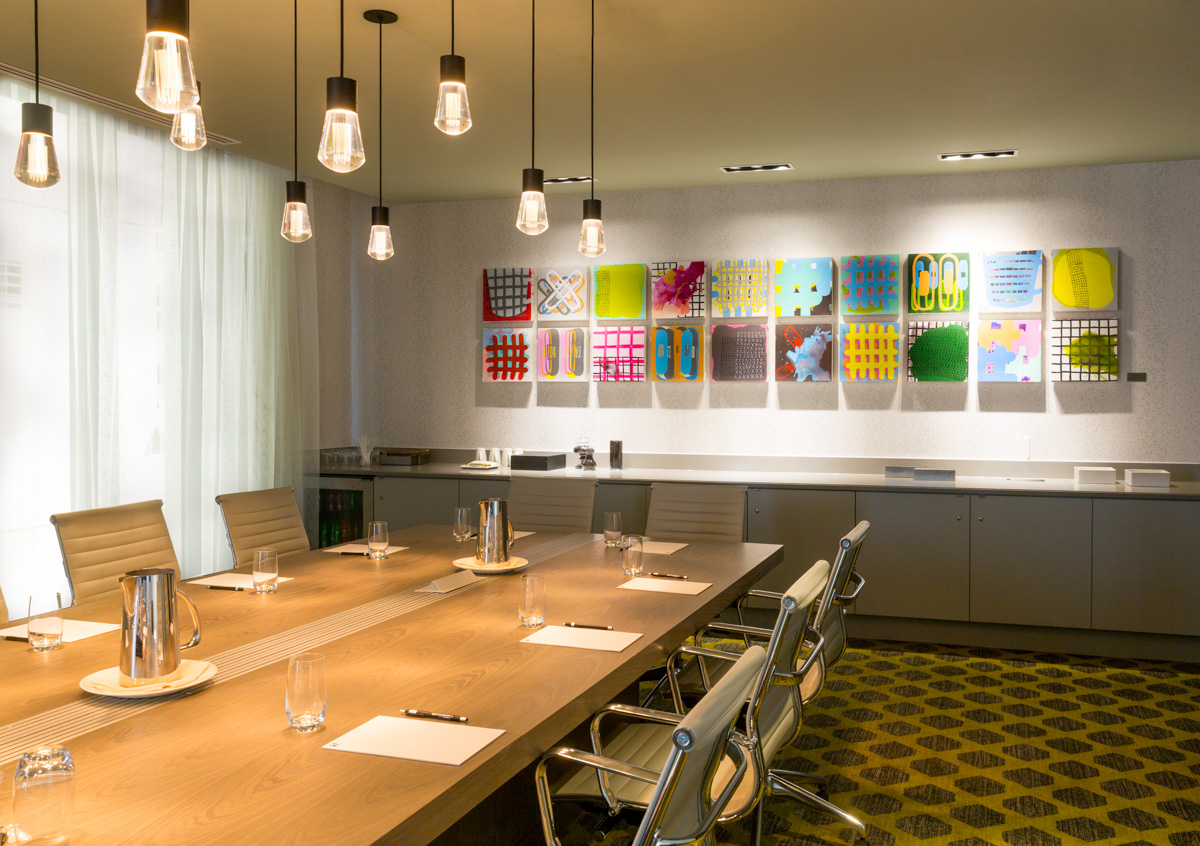 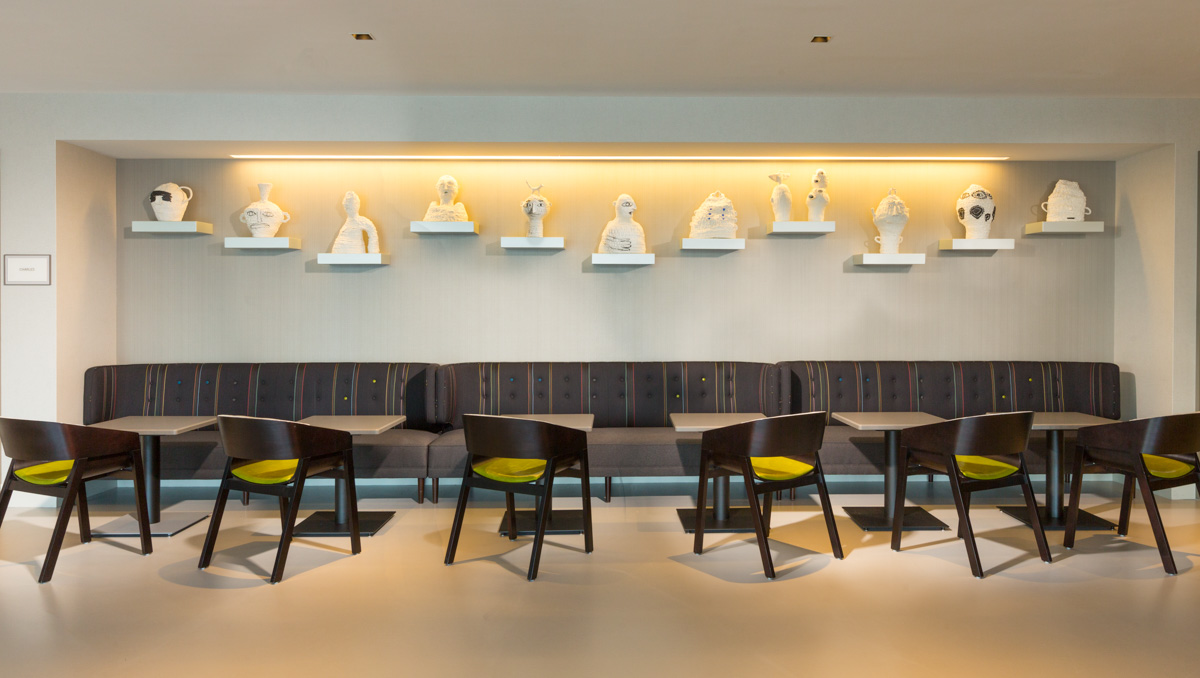 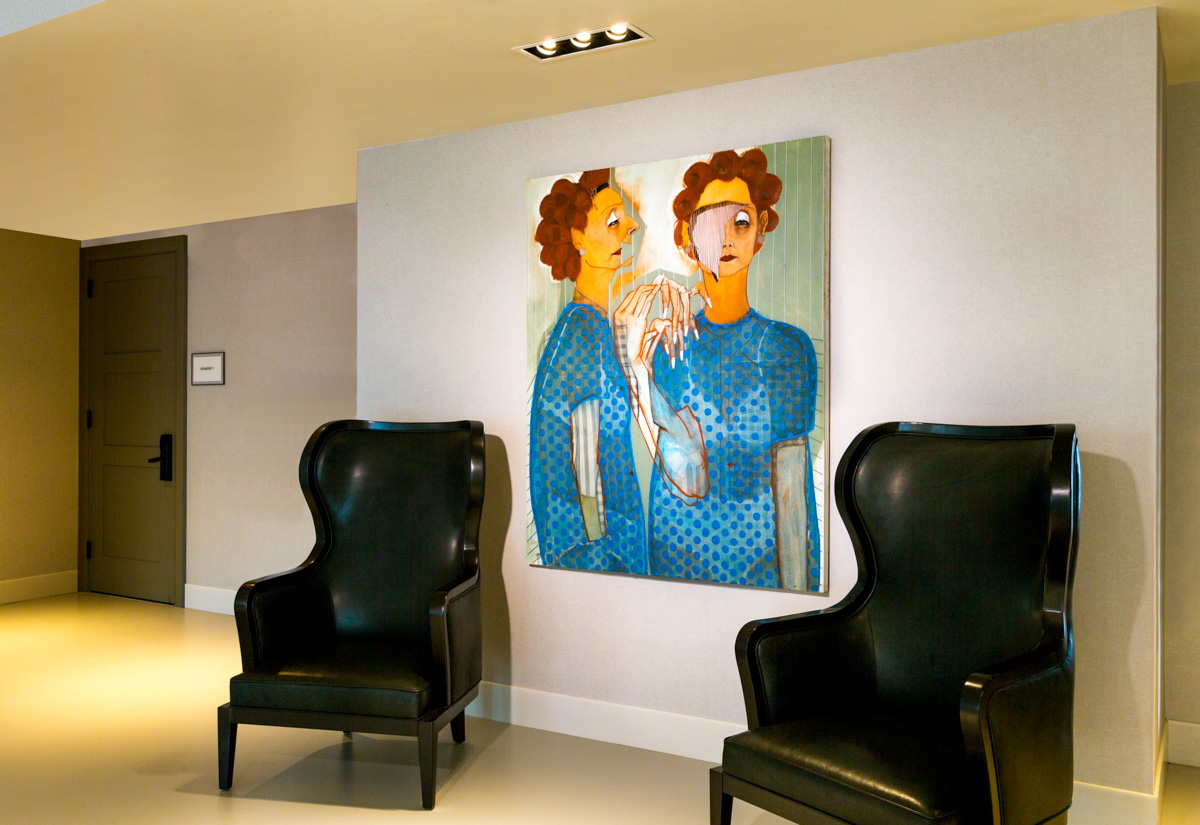 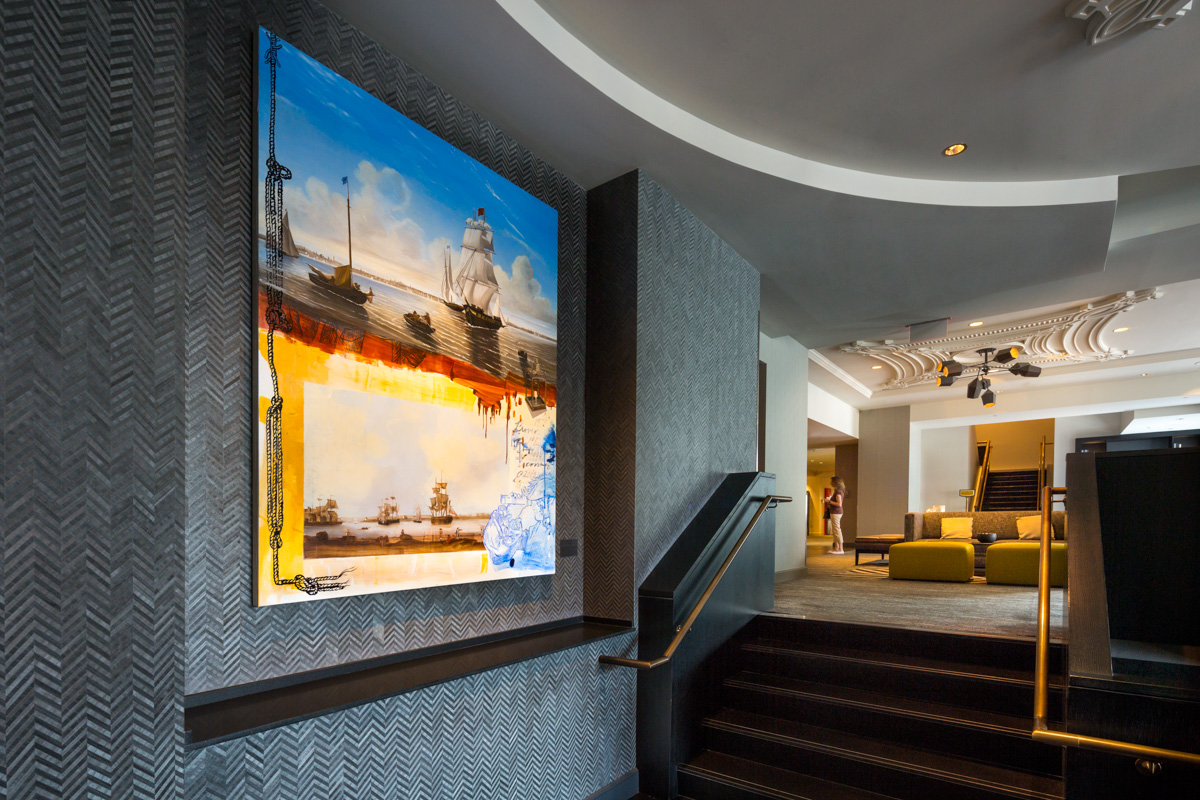 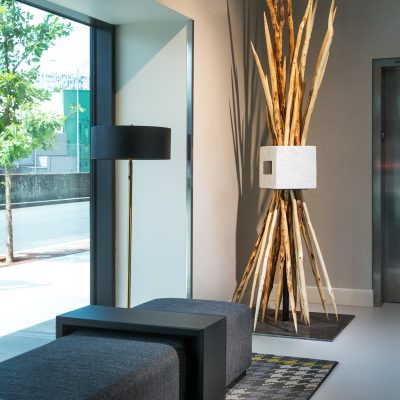 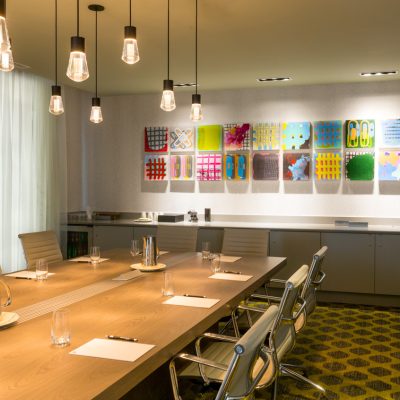 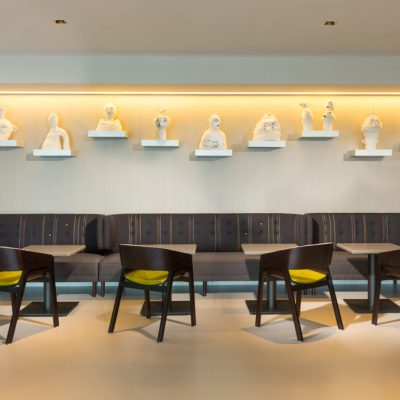 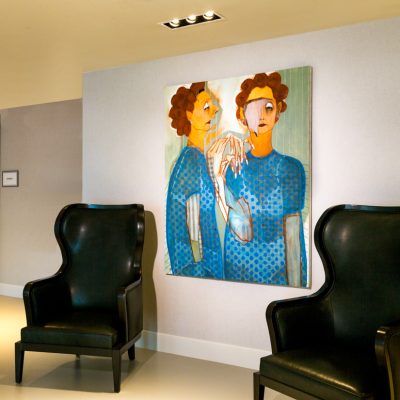 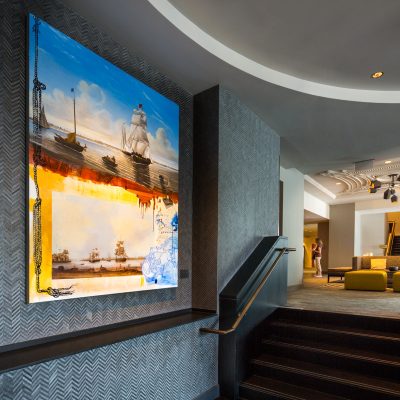 Originally developed by Boston University (BU), Hotel Commonwealth first reinvigorated Kenmore Square in 2003. With the renovation and expansion beginning in 2014, the boutique hotel’s modern and eclectic aesthetic nods to Boston’s colonial roots,  New England’s nautical ties, the site’s gritty past life, nearby Fenway Park, and the hotel’s association with BU. The collection features fine art by BU students, alumni, and faculty among works by other Massachusetts artists.
On the site where Hotel Commonwealth now stands was once, from the mid-1970s until the 1990s, The Rathskeller (nicknamed The Rat), an iconic, live music venue that became a Boston rock-and-roll institution. As a tribute to the former club, Hotel Commonwealth designed the Rathskeller Suite with historic rock-and-roll artifacts and photographs from the club’s glory days, including a book made specifically for the suite. The SoHo suite, designed to create an artist’s loft vibe, highlights the hotel’s connection to BU and features art from current and former BU art students and faculty. Leveraging Hotel Commonwealth’s rich history, NINE dot ARTS curated an art experience that pays homage to Boston’s past, present, and future while celebrating the city’s vibrant artistic community.
Show more

Cambria Hotel Columbia Downtown The Vista by Highside Development and ...

Located in a historic, art-centric DC neighborhood called Dupont Circle, Hotel Madera serves as a sophisticated urban escape, where guests can enjoy the city’s hippest bars, bistros, and boutiques alongside street graffiti and artist events in what’s known as t...

The new Catbird Hotel is the latest addition to Denver’s famous RiNo Arts District, which is peppered with vibrant murals, restaurants, and bars that blend industrial architecture and modern street styles. Catbird’s edgy, unabashed personality is fitting for th...

Once known as the “Gateway to Yosemite,” the town of Merced, California was a vibrant cityscape graced by cultural icons such as Marilyn Monroe, Richard Nixon and John F. Kennedy. A trio of hotel, event and multifamily spaces in the historic El Capitan Hotel, t...

The goal of the art program at the Rally Hotel was to transport guests and visitors to the world uniquely known as Denver, Colorado. From a jaunt to the mountains to the first pitch or kickoff of a sporting event, anyone who visits The Rally will have a greater understanding of all that makes the...

A beacon of opportunity, equity and inclusion in Denver, the Clayton Members Club and Hotel features an expansive collection of over 200 artworks, crafted by a delegation of mainly local artists. By partnering with the RedLine Contemporary Art Center, a 501(c)(3) f...