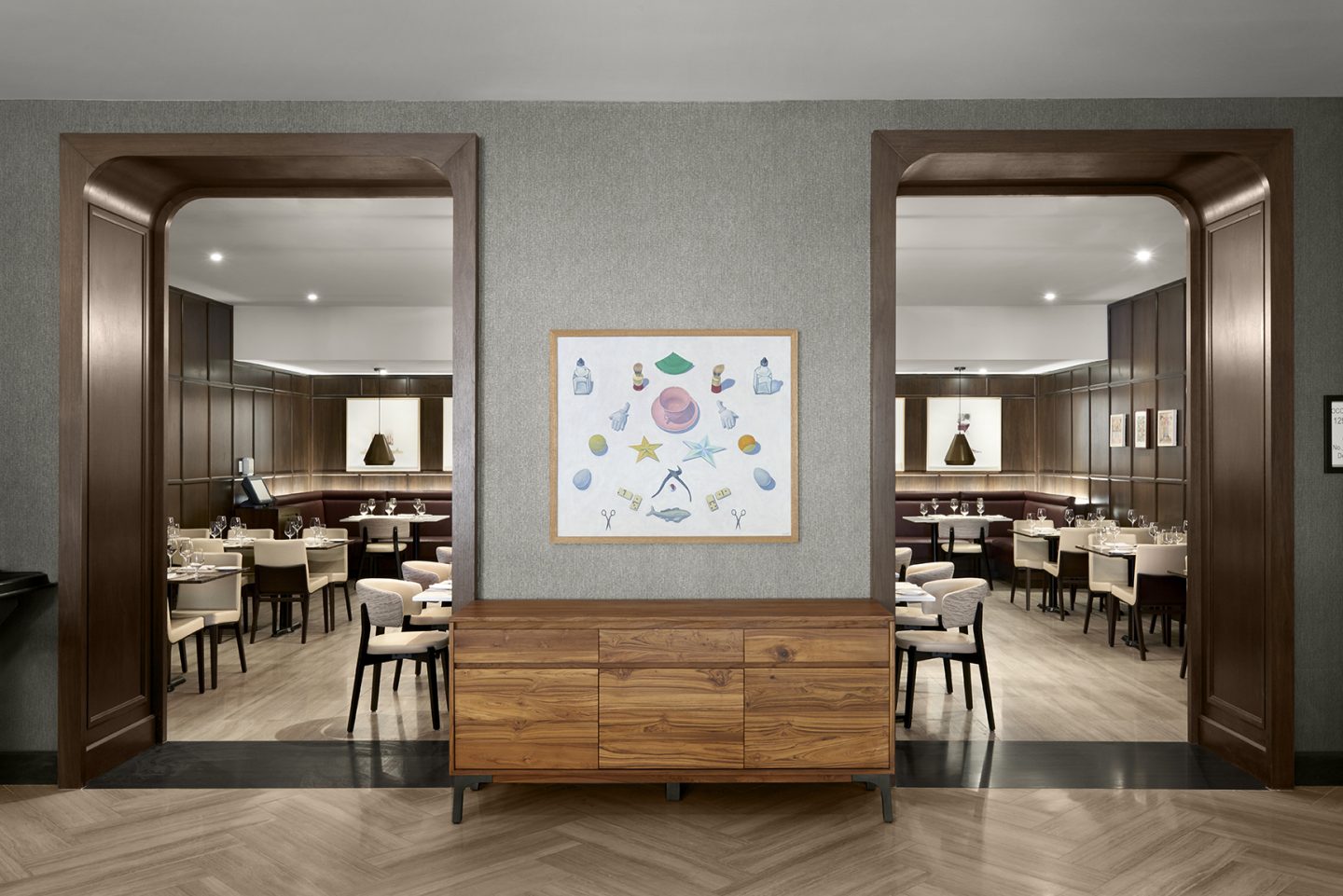 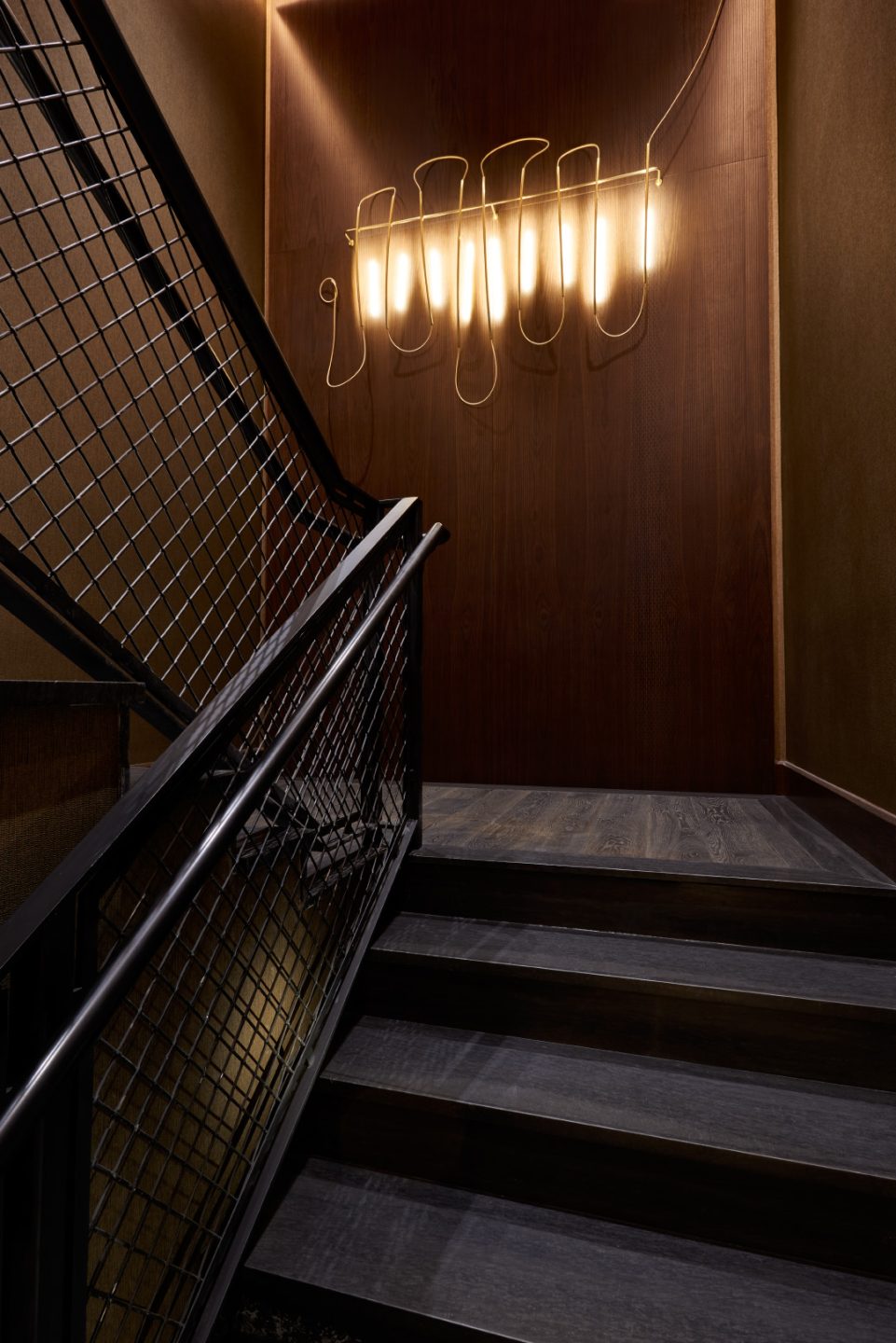 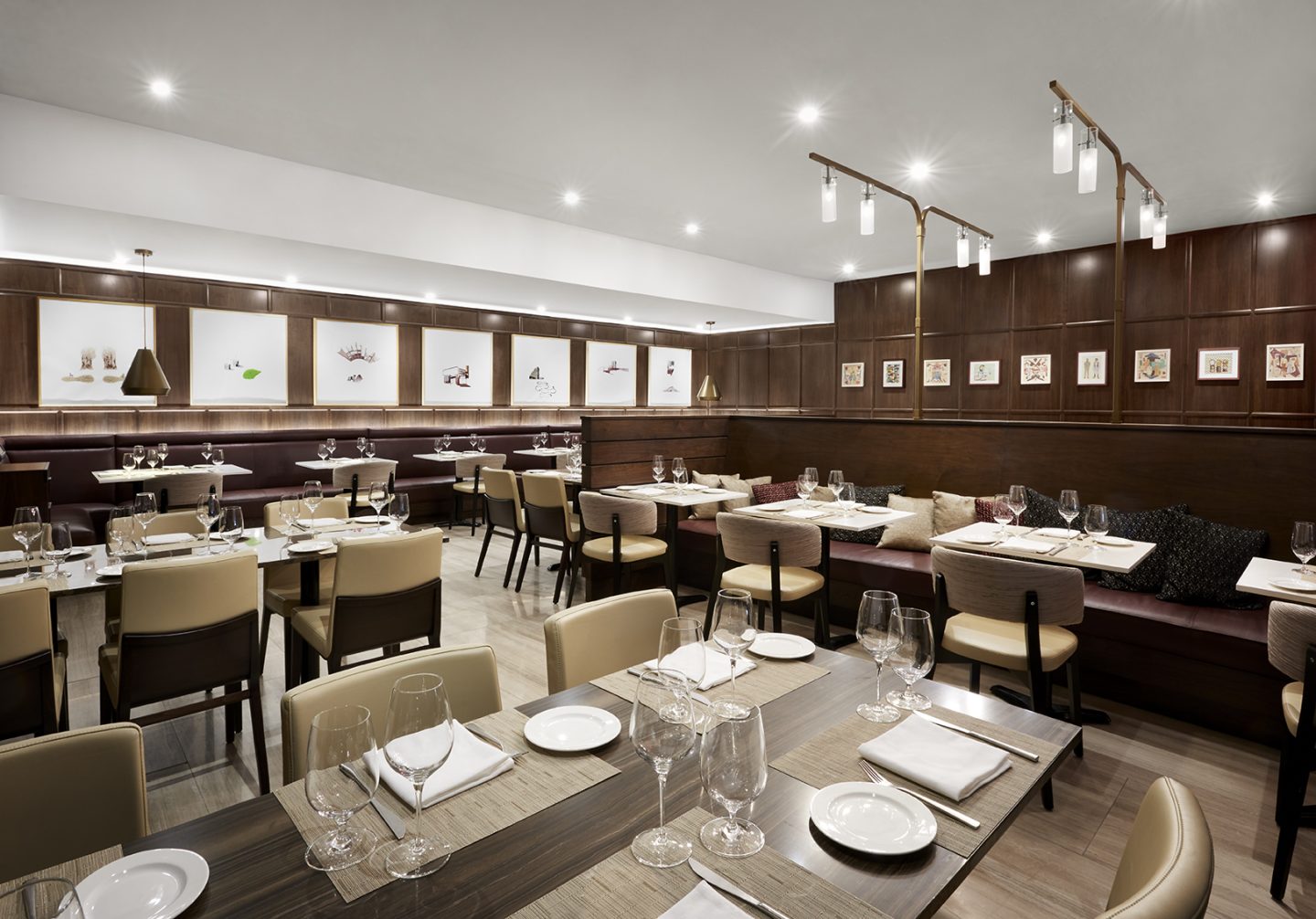 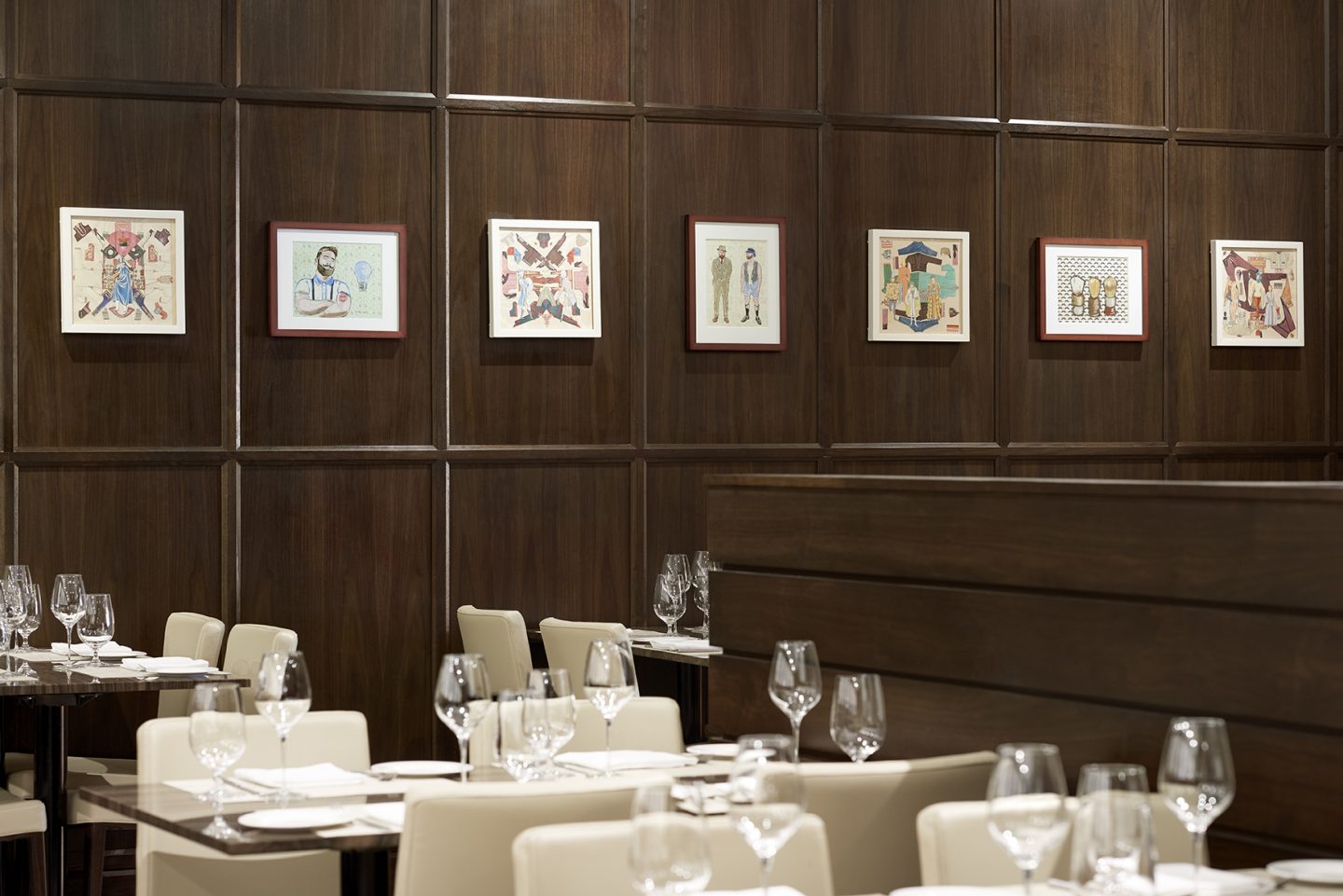 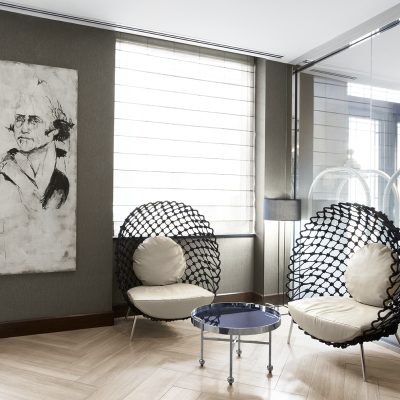 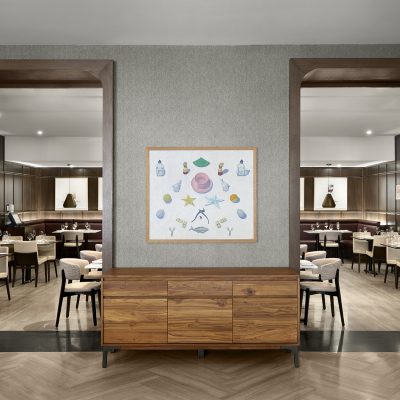 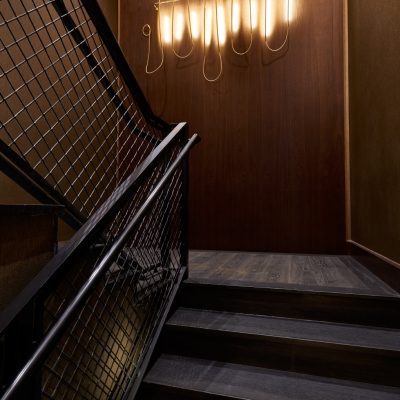 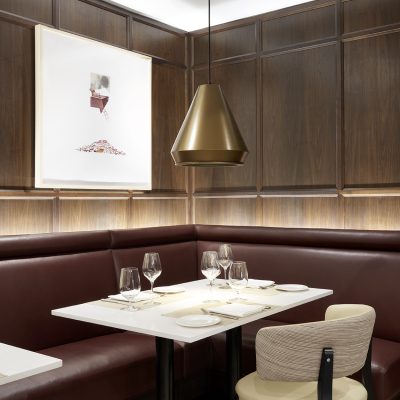 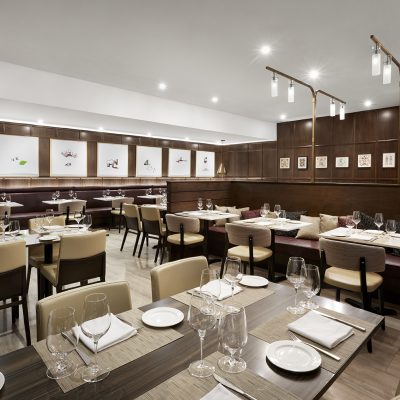 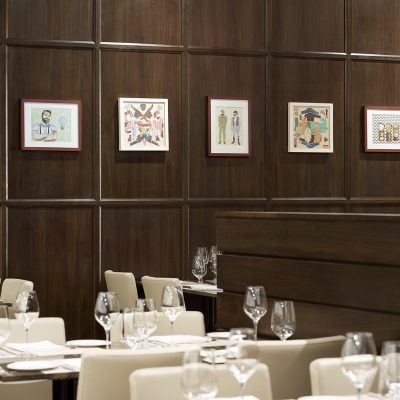 In the heart of the Boerum Hill Neighborhood in Brooklyn, The Hilton Brooklyn stands in the center of historical and cultural intrigue. The hotel’s art collection pays homage to historical figures while bringing to light contemporary artists making their imprint on the Big Apple. A sculpture of George Washington, while not a New Yorker himself, stands protectively in the lobby, just as he did in six battles defending New York from the British. Local artist Scott Duce creates his own version of the streets of New York in his In Public series of painted vignettes which capture his view of single encounters with people in the city. Collages on fabric by Dave Seiler and intimate pastel studies by Danyl Cook pay tribute to the city’s celebration of fashion while the striking Line Lamp by contemporary New York artist Elish Warlop brings the cities’ bright lights alive within the comfort of the hotel. Ilene Curts‐Thayer makes reference to traditional aspects of hospitality in her painting, Pink Cup, featuring a Baker-Miller-esq teacup and saucer at the center of a surreal composition. This collection strives to give the hotel’s guest a glimpse of the magic hidden behind each street corner, while offering them the opportunity to experience the neighborhood’s rich history.

Cambria Hotel Columbia Downtown The Vista by Highside Development and ...

Located in a historic, art-centric DC neighborhood called Dupont Circle, Hotel Madera serves as a sophisticated urban escape, where guests can enjoy the city’s hippest bars, bistros, and boutiques alongside street graffiti and artist events in what’s known as t...

The new Catbird Hotel is the latest addition to Denver’s famous RiNo Arts District, which is peppered with vibrant murals, restaurants, and bars that blend industrial architecture and modern street styles. Catbird’s edgy, unabashed personality is fitting for th...

Once known as the “Gateway to Yosemite,” the town of Merced, California was a vibrant cityscape graced by cultural icons such as Marilyn Monroe, Richard Nixon and John F. Kennedy. A trio of hotel, event and multifamily spaces in the historic El Capitan Hotel, t...

The goal of the art program at the Rally Hotel was to transport guests and visitors to the world uniquely known as Denver, Colorado. From a jaunt to the mountains to the first pitch or kickoff of a sporting event, anyone who visits The Rally will have a greater understanding of all that makes the...

A beacon of opportunity, equity and inclusion in Denver, the Clayton Members Club and Hotel features an expansive collection of over 200 artworks, crafted by a delegation of mainly local artists. By partnering with the RedLine Contemporary Art Center, a 501(c)(3) f...